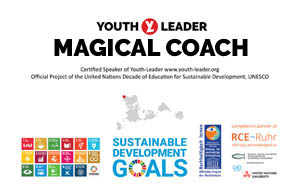 “School boards and cities can boost exciting youth-led development projects … if they let go of exaggerated worries, trust youth and their citizens.”

A town, a student club (company) and a village in the Himalaya live a thriving development partnership with diverse activities on both sides. You can join in, you can follow the example with YL Project Partners or launch your own. Here is practical wisdom.

Steffen has 2 decades of experience with a simple, robust, ambitious, multi-faceted and holistic development model in the Himalayan Mountains with a fabulous success story, proven citizen involvement, trustworthy, able, huggable partners, plenty of opportunity to bring in own ideas and pay visits. Everything that makes a rich YL Project Partnership with

You’ll still have questions about formal issues, challenges and tricks, and Steffen can tell you all about it from perspectives of Agenda21 office, city, school and youth + garnished with lovely anecdotes and of course stories of the annual highlight – a work visit financed by students’ families, combined with tours of Nepal guided by Raj, the local manager who happens to be the owner of Social Tours Nepal (and who has many enlightening stories and knowledge to share).

Will you add more bridges between Nepal and the world?

will you adapt the approach for another YL Project Partnership? 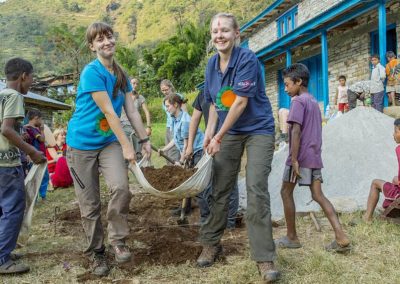 Study the story of Namaste Nepal. Think about life at school and how such a long-term project animates life at school with purpose. Quick afternoon sponsor runs are not overly exciting. But a 48 hour sponsor run changes things. What feelings, stories, opportunities and results does it open up?

… tasked to activate citizen involvement in sustainable development in Freiberg town and region, Steffen realized that a global development partnership is a real case study for schools to learn of basic needs, sustainability challenges, people-powered solutions and activate people to bring them to Nepal … making it a catalyst to activate citizens, experience their agency and reflect on their own region’s challenges.

Teachers and students quickly connected with the vision and decided to form a student company (a student club that can engage in profitable financial transactions) and it did not take long to decide on priorities for the village’s needs, but also add-ons that would improve life.

Simple or advanced, all goals came with surprising additional challenges, but also surprising solutions appeared from all sides.

The scope of activities

… are profits generated of

that involves the entire city to cover the distance between Freiberg and Gati.

Students run from Friday to Sunday afternoon, day and night, even thunderstorms do not stop them. This gets a badass smile on everybody’s face and gets also those (boyz) involved that care about sport and nothing else.

The story, quest, the 48 hour time window and success updates enable the whole town to join,

… which attracts companies as sponsors and runners…

it makes it a huge happening, and with some nice drinks and treats it becomes a Philanthro-Party!

It has become an annual HIGHLIGHT in the town’s annual festival calendar!

Plus, it has inspired schools in other states and countries to join the endeavor.

Freiberg only has 40,000 inhabitants … but you may assume that something’s special with those people and this story could not happen elsewhere. Hence, we tell you of the town of Buchen of less than 20,000 inhabitants 400 kilometers away.

A math teacher used their story in class tasking students to calculate the costs of building a school in the Himalaya, casually stating that “you wouldn’t even score $1,000€” 🙂 His students decided to show him…

in a town of only 17,773 inhabitants … where nothing ever happened … since now, they have found a mission!

THIS can happen in any sleepy small place since there’s good caring people everywhere, but what they need is an adventure with purpose that makes relevant tangible impact on lives and land

… and this feeling of agency and power to shape the future of entire regions of course will translate to their own region afterwards … and usually such slow regions are in need for positive changes.

It begins with SPIRIT and the experience of impact. For this, it’s perfect to start

When a major earthquake struck Nepal in 2015, it devastated the entire region. All of Gati was destroyed, only 3 houses remained intact. The old school had entirely collapsed, the newly built on had cracks, only the kindergarten remained intact.

Students were shocked to see some of their years of work flattened to rubble. But this thought faded quickly as they realized that their loss was nothing compared to the new state of lack of their friends. It took them one minute to decide let’s rebuild. And soon, a renovated earthquake-proof school stood on the mountain shining like a symbol of hope. It shone that bright that also the other 6 villages in the valley “wanted a good school”, now. Namaste Nepal took a breath and declared “alright, we will build seven schools for all seven villages.

Fans and supporters grinded their teeth whether the students would achieve or break under the weight of the challenge … and were delighted to hear that after just 3 years, all 7 schools were complete and ready to welcome first classes.

$700,000€ got unlocked. This is what happens when fired up students hear of a state education minister coming into town – they went to meet him, explain their work, the new challenge and that they needed his help. Impressed he responded “sure, what can I do?” and students said “simply activate your newsletter to all schools in the state and call them to take part”. They formulated the message and it only took a minute to send it off. Schools flocked in, also towards Christmas season, the rest can unfold in your imagination.

A Magic Wand and its ingredients

This is the approach that we follow with YL and encourage everyone to use, and we love the example of Namaste Nepal student company because it shows all aspects that often go unnoticed

The STUDENT VOICES at the centre are THE KEY COMPONENT of the entire success story.

is a very precious and strong contributor to success

while – as Steffen will always emphasize – the project is in the hands of students while he listens and acts behind the scenes to facilitate relations with partners.

This is why we are are eager and relieved to know Steffen among us to complement youth and club voices,

so that adult stakeholders in school, city, civil society can discuss with their like on their roles, their to-do’s, their not-to-worry about’s, their no-no’s … which are all common sense but one needs to talk about it once to make sure that no vague gaps of knowledge, knowhow or confidence keep us from going ahead or slow momentum down.

Is your group on fire to take action for a partner region abroad? Then let’s get the mind into motion and generate some purposeful, practical questions.

Will you even take activities?

You can take your new found knowhow to work with flying banners with Namaste Nepal and other YL Project Partners.